Various ways to include comments on your static site

Static site generators like Jekyll, Hugo or Hexo have become a popular choice for a blogging platform or a CMS. When using something like WordPress or Medium you get a comment section out of the box. It is not as straightforward in a static environment. In this article, I will summarize different options to provide your audience with a way to leave a comment. 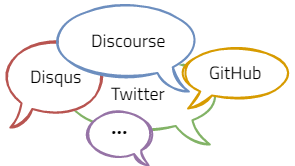 3rd party services are mostly easy to integrate. On the downside, they may hurt both performance and privacy. Comments are loaded via JavaScript, so they may not be indexed by search engines. Additionally, users need to have (or create) an account in order to post a comment (which might be a pro when building a community). Finally, all comments are located on an external server over which you have no control. The provider may reuse the data or just shut down the service anytime (not unusual after acquiring competitors).

Here are some common third-party providers:

When you care about your website’s performance but don’t want to miss the convenience of third-party services, you may want to outsource the comments completely. The implementation is as simple as including an external link at the end of your articles. However, data ownership remains an issue you need to evaluate.

Whether this is a viable option also depends on your reader’s demographics.

Self-hosting blog comments solves many 3rd party issues as you’re in charge of everything. This also means that you have to take over the whole administration process, including spam protection (or delegate this issue to another service like Akismet).

If you’re targeting software developers, consider using GitHub for comments. Create a GitHub issue for each blog post and load the issue comments on your site. This method can be automated with Gitment. Another alternative is utterances, which provides a ready-to-use comments widget built on GitHub issues.

For a broader audience, you can still utilize GitHub without a required account. Staticman first turns comments into a format like JSON or YAML. Then, it either commits them automatically into your git repository or it creates a pull request (if you prefer comment moderation).

If you don’t get a lot of comments, think about adding them manually. Let your readers email you via a form or a link at the end of every post. You get fully static comments without JavaScript, some kind of moderation and maybe even spam protection (depending on your email provider). This, of course, comes at a cost of manual work.

Finally, removing comments altogether is also an option. I suggest adding at least a “Drop me an email” link at the bottom of the page. I’ve received some valuable comments over the years, but I believe they would also have reached me via email if I had no comment section. However, you won’t be able to build a community with people interacting with one another.

Jeff Atwood claims that a blog without comments is not a blog. Sure, he gets hundreds of comments, and he has built a big community around it. But this may not apply to everyone. Leo Babauta from Zen Habits turned off comments so he could spend more time creating content than moderating comment spam.

In five years of blogging, I’ve got 77 comments (~1.28 comments per month). That’s way too little interaction to invest much time in a self-hosted solution. But I still care about the (at least initial) page load, so I’ve chosen a middle ground. I’m keeping Disqus for now, but I’ve placed a “Load comments” button, so nothing gets loaded unless the user clicks on it.

You can apply this to most of the methods mentioned in this article.

I’ve presented different techniques to include comments on a static website. So, which option should you choose for your site? There is no silver bullet. The best method depends on your requirements:

Any thoughts? Did I miss something? Just leave a comment (no pun intended).